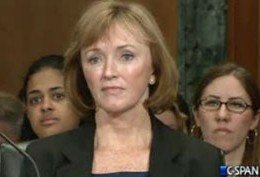 On April 9, 2013 Marilyn Tavenner has a "Remarkably Friendly" Hearing from the members of the Senate Finance Committee

Marilyn Tavenner, the acting head of the Centers for Medicare and Medicaid Services (CMS) and President Obama's nominee to keep the job found both Democratic and Republican support during a Senate Finance Committee hearing. For more information from various sources, please click the links below.

The Associated Press: Senate Approval Seen For Obama Health Care Nominee Republican lawmakers are heaping praise on a former nurse picked by President Barack Obama to run Medicare and Medicaid, and also oversee his health care law. If the Senate confirms Marilyn Tavenner, as expected, it may be the closest thing to a truce in the nation's political wars over health care (Alonso-Zaldivar, 4/10).

The Wall Street Journal: Medicare Chief Expected To Get Nod In recent years, the job has become so politically contentious that lawmakers haven't been able to formally confirm a head of the Centers for Medicare and Medicaid Services. In a hearing Tuesday to vet her for the post, Ms. Tavenner gained support from both Republicans and Democrats on the Senate Finance Committee, who said she has proved herself capable as acting administrator of the agency since late 2011 (Dooren, 4/9).

Politico: Marilyn Tavenner Soars Through Senate Finance Hearing The Senate Finance Committee on Tuesday overwhelmingly lauded President Barack Obama's nominee to run Medicare, Medicaid and even much of the health reform law. Marilyn Tavenner, who has run the sprawling Centers for Medicare & Medicaid Services as acting administrator for well over a year, was praised by Republicans and Democrats during her confirmation hearing, indicating that she is likely to sail through the full Senate without a reprise of the nasty politics of the health law (Haberkorn, 4/9).